Posted on April 13, 2018 by thecenterforcontemplativepractice 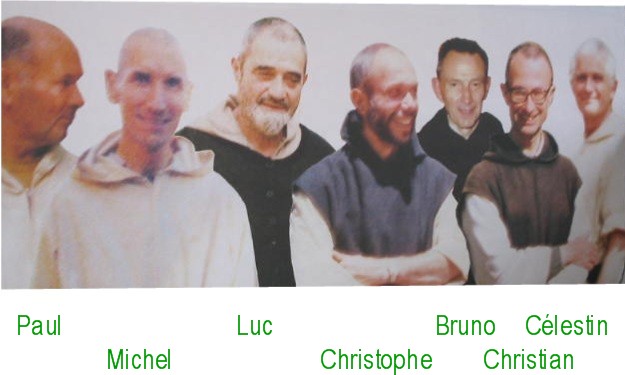 The following information is from Wikipedia about the martyrdom of Seven Cistercian monks from the Monastery of Our Lady of Atlas, Algeria, I offer it as part of my Lecio Divina meditation last week as I prepared for the Resurrection.

“On the night of 26–27 March 1996, seven monks from the Atlas Abbey of Tibhirine, near Médéa, in Algeria, belonging to the Roman Catholic Order of Cistercians of the Strict Observance (known as Trappists) were kidnapped during the Algerian Civil War. They were held for two months, and found dead in late May 1996.

The circumstances of their kidnapping and death remain controversial; the Armed Islamic Group (Groupe Islamique Armé, GIA) claimed responsibility for both, but in 2009, retired General François Buchwalter reported that the monks were killed by the Algerian army.[2]

At approximately 1:15 AM on 27 March 1996, about twenty armed members of the Armed Islamic Group (GIA) arrived at the monastery of Tibhirine and kidnapped seven monks. Two others, Father Jean-Pierre and Father Amédée, were in separate rooms and escaped the kidnappers’ notice. After the kidnappers left, the remaining monks attempted to contact the police, but found that the telephone lines had been cut. As there was a curfew in force, they had to wait until morning to drive to the police station in Médéa.

On 18 April, the GIA’s communiqué no. 43 announced that they would release the monks in exchange for Abdelhak Layada, a former GIA leader who had been arrested three years earlier. On 30 April, a tape with the voices of the kidnapped monks, recorded on 20 April, was delivered to the French Embassy in Algiers. On 23 May, the GIA’s communiqué no. 44 reported that they had executed the monks on 21 May. The Algerian government announced that their heads had been discovered on May 31; the whereabouts of their bodies is unknown. The funeral Mass for the monks was celebrated in the Catholic Cathedral of Notre-Dame d’Afrique (Our Lady of Africa) in Algiers on Sunday, 2 June 1996. Their remains were buried in the cemetery of the monastery at Tibhirine two days later.[3]

The surviving two monks of Tibhirine left Algeria and traveled to a Trappist monastery near Midelt in Morocco.[4]

OF GODS AND MEN

There is a movie made of this event entitled Of Gods and Men. Here is the source from Wikipedia.

Of Gods and Men is a 2010 French drama film directed by Xavier Beauvois, starring Lambert Wilsonand Michael Lonsdale. Its original French language title is Des hommes et des dieux, which means “Of Men and of Gods” and refers to a verse from the Bible shown at the beginning of the film. It centers on the monastery of Tibhirine, where nine Trappist monks lived in harmony with the largely Muslim population of Algeria, until seven of them were kidnapped and assassinated in 1996 during the Algerian Civil War.[2]

Largely a tale of a peaceful situation between local Christians and Muslims before becoming a lethal one due to external forces, the screenplay focuses on the preceding chain of events in decay of government, expansion of terrorism, and the monks’ confrontation with both the terrorists and the government authorities that led up to their deaths. Principal photography took place at an abandoned monastery in Azrou, Morocco.

The film premiered at the 2010 Cannes Film Festival where it won the Grand Prix, the festival’s second most prestigious award. It became a critical and commercial success in its domestic market, and won both the Lumières Award and César Award for Best Film.

The one command Jesus gave us is: love one another as I have loved you.  This act of love by the seven monks of Our Lady of Atlas epitomizes that command as something still relevant even in our own day.

The seven martyrs are saints, although not yet made Saints by the Church Universal, and certainly worthy of emulation for giving their lives for the love of Christ.

The Catholic Church and Eastern Orthodox Churches both honor those who have gone before us and exhibited extraordinary courage and love. We honor all those who are in heaven marked with the indelible sign of the cross on their spirit, but the Church Universal gives special honors to those it declares to be worthy of our devotion and practices so that we, too, may call upon them to help us in our quest to move from self to God.  They did it, and we ask their intercession, those standing before the Throne of the Lamb, to pray with us to Christ and through Christ to the Father giving praise and glory in union with the Holy Spirit.

The commuion of saints, which we recite in our Creed is a living testament to those who, either saints or Saints (proclaimed by the Church Universal) to have loved God with all their minds, all their hearts, and all their strength and their neighbor as themselves.

I have had occasion to have conversations with unbelievers about the reality of the communion of saints. They claim they do not pray to any saint, only to God. Neither do I, but I have something more. I am joined, as I pray with the Seven Cistercian Martyrs of Atlas, who stand right now before the Throne of God to add my prayer with the living and eternal prayer of their love to give glory to the Father, through the Son, in union with the Holy Spirit. I ask God to have the strength of grace to live in such a way as to recreate in me the mind of Christ Jesus (Phl 2:5). The communion of saints taps into the ongoing prayer of those who have gone before us, my mom and dad, those who, through the centuries have tried to follow the command of Christ to love one another. Were all those saints sinners. You bet. Were all these saints imperfect and in need to take up their cross daily to follow Christ? Indeed. It is not because they are imperfect that we believe in them but rather precisely because they overcame their humanity to choose God. They were what Adam and Eve were not. They were what Christ was and is and will be. They all stand before the Throne of the Lamb in adoration by their lives and the transformation of their weaknesses and sins to glorify God, in the grace of Christ’s one sacrifice of love, the passion, death, resurrection and ascension to the Father.

THE HALL OF FAME

Using a modern analogy, Saints, those formally inducted as such as actually being made a member of the Hall of Fame, like Basketball, Baseball, and Football.  One who makes it to the Hall of Fame must be elected to its elite status.  There are many football players but only a few make the Hall of Fame. We honor them for being best at what they do. In the same way, Saints are elected to the special honor because they were ordinary persons but loved others in an extraordinary way. We do not adore Saints because they just have a human nature. Only Jesus had both human and divine nature.

Mary is honored as the first of the Saints. She is not adored as God, even though she is called Mother of God (that is food for another blog).  In our age, we honor those who excel at their craft, as in sports. The Seven Cistercian Martyrs of Atlas Monastery are those we want to emulate and be like principally because they chose Christ over the world and life over death. Saints and saints (your mom and dad and family in Heaven) are still alive. When we pray to them we do not pray TO them as God but ask them to help us by praying WITH us as they stand before the Son, giving glory to the Father in union with the Holy Spirit.

Think about the Seven Cistercian Martyrs of Our Lady of Atlas Monastery next time you want inspiration from those in our time on how to love God with all their hearts, all their minds, all their strength and their neighbor as themselves.

Praise to the Father and the Son and the Holy Spirit, now and forever. The God who is, who was and who is to come at the end of the ages. Amen and Amen.  –Cistercian doxology

← I ATE MEAT ON GOOD FRIDAY.
THE CUP OF SALVATION →