THREE QUESTIONS THAT MAY ESCAPE YOU IN THE SEASON

Posted on December 15, 2018 by thecenterforcontemplativepractice 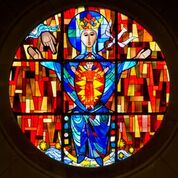 This is the season to be jolly. It goes without saying (which is why I am saying it) that the search each one of us has to find meaning is much more mysterious than just a surface look at our physical universe (what we can experience through our five senses).

Our transition from the Sacred to the Profane has been centuries in coming, but it is here now and threatens to seduce the minds of the pusillanimous. (that means weak willed individuals). As a Lay Cisterecian who like to reflect on reality in terms of Lectio Divina (Philippians 2:5), I look at reality now in three layers, or three separate universes, each distinct, each complimenting each other, each making up an indispensable part of the whole. Three universes yet one reality. Does that remind you of anything?

Let me take you on a holiday journey, one which you may never have taken but which has always been there before time had a tick and a tock.

My thinking is that the implications of the Nativity of Christ is a milestone in the development of three universes (physical, mental and spiritual). I see all reality in terms of these three universes.

Based on my Lectio Divina meditations, I submit to you that the next level of reality, the mental universe, is more powerful than anything in the physical universe. What quasar knows that it knows? What cosmic web can choose that which is harmful for it over what is good? Even the most meager human can do that. Which brings me to my second question. Why are humans the only ones who know that we know? Know what? Why a collective intelligence that we can pass on to our posterity?  Your pet does not know that it knows. It knows when it is hungry but not much beyond living in the natural state. Animals can’t answer why something is. Why can you?

And yet, the least person in the kingdom of heaven, the spiritual universe on earth and in heaven, is more powerful than those who just exist in the physical and mental universes alone. Why? Because they have the ability to reason and the ability to choose that which is meaningful, but what they choose to believe propels them forwards, not backwards. To live in the spiritual universe you must choose to do so. To be sure humans are not God, with the exception of Christ, but we have been raised up in adoption to give praise to the one who is power and majesty before the Throne of the Lamb.  Heaven is not only our purpose in life (Deuteronomy 6:5 and Matthew 22:37) but our final destiny as humans. Now that is power!

So where does Christmas fit in? In human history, there are four epochs of time, all beginning with a “Yes”.

HUMAN  CREATION — This epoch began with a yes, initially, but then reverted to a No with Adam and Eve. Original Sin describes the human condition in which we find ourselves, one in which we still struggle to work for our bread, have suffering and pain, often go off the path of what is right to become our own god, and finally face the ultimate effect of sin, death. There is Hope of a redeemer to save us from our troubles and fulfill our original destiny in the Garden of Eden. This is the story of how God loved his people so much that he told them how to be one with him through the Law and the Spirit.

THE NEW CREATION –– This epoch is one which fulfills the longing of a people to be free to keep the covenant given by God on Mt. Sinai. Their fidelity or lack of it is the history we call the Old Testament. In all of this confusion and struggle is a promise of someone to come that will restore the convenant and open it up to all humans. There is one problem. God had to become one of us to “buy back” that which Adam and Eve sold to the pawn shop. The price was being born as a human at all. That had to be accomplished in a natural way, consistent with the Law of Nature.  The price was to empty himself completely (die) in atonement for sins of all humans. (Philippians 2:5-12 and Romans 5). This is the story of love, one where God became one of us to show us how to live. There is one law that Christ left us, to love one another as He has loved us.

THE CHURCH UNIVERSAL — This fourth epoch is from the time of Christ’s Ascension to the Father to the Second Coming. It demands a yes from you, the you in each age, the individual who must freely commit to the new covenant by doing which Christ taught us. Heaven is a place of an eternal Yes, the result of our struggle on earth to overcome the lure of the World to be our own god. May won’t get it. May will resist it. Some will think they have it but don’t. Some will have it but won’t realize it.  Matthew 25:31-46. This is your chance to say YES to the YES of Mary, the Mother of God, the YES of Human Creation that is good, the YES of all matter, time, and energy. All creation glorifies the Father. God left his DNA, the imprint of His thumb, so to speak, on matter, energy, and time. We, humans, have the ability to reflect on all that is and ask Why. We, humans, have the opportunity to say YES to creation each day as we try to discover meaning in the world in which we find ourselves. We are not destined to be Democrats, Republicans, members of this or that country, male or female. We are one body, one faith, and have one Lord.

Praise be the Father and the Son and the Holy Spirit, now and forever. The God who is, who was, and who is to come at the end of the ages. Amen and Amen.  –Cistercian doxology

← FOUR QUALITIES FOR CONTEMPLATIVE SPIRITUALITY
PEACE BEYOND ALL TELLING →